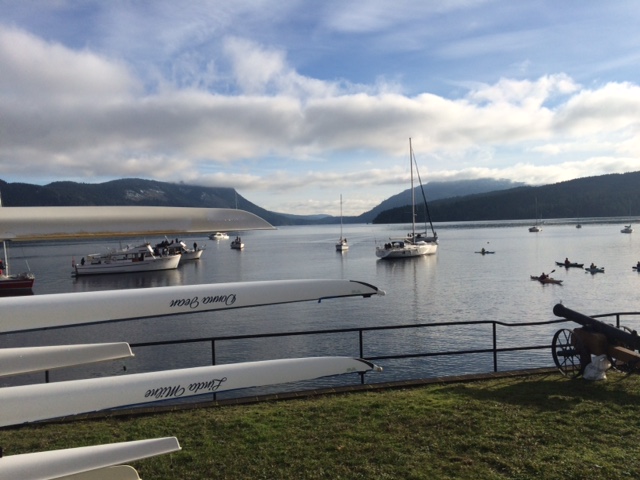 Maple Bay Rowing Club enjoys a wonderful place in its community.  Our clubhouse is used for many community events, including today’s POLAR BEAR SWIM.  The sun shone on the day as swimmers plunged into the ocean. Mostly folks gathered for the warmth that only community can bring.  A great beginning to 2018!

MBRC opens its doors to the community every January 1 to host the polar bear swim.

The yacht club ( MBYC) loans its cannon every year.  Volunteers load the heavy gun and transport it to the rowing club .It is fired at noon and then the swimmers run into the water

Rowing club volunteers make hot chocolate and cover the club floors with cardboard so the swimmers can use the club before and after the swim to change and get warm.

58 participation certificates were handed out. There were probably more swimmers than that – but not everyone bothered to collect their certificate –  made and name put on each individual one by volunteer Aude Volstad  (Yes, she’s connected to our single scull “Volstad”.)

Much fun was had by all!