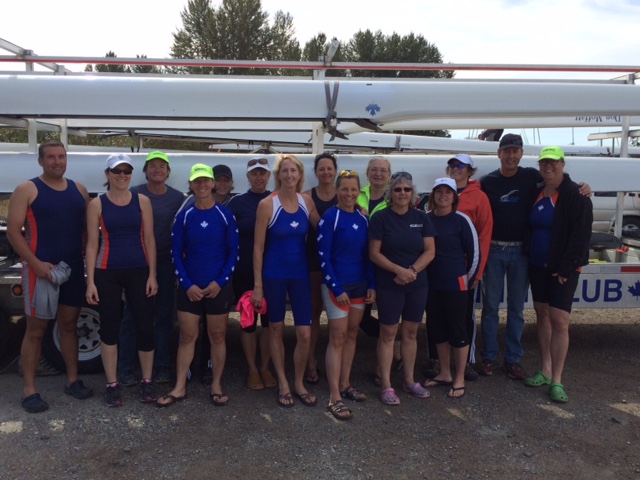 It was a beautiful, sunny day as 15 Maple Bay Masters headed to the Nicomekl River Regatta to race.  Two waves of racing shells would be making their way down the course.  Our three women’s quads were in wave one while our double and single would race in wave two.

The regatta race meeting was held at 9:30am.  We heard about the conditions:  ebb tide and SE wind.  A recipe for lurking currents and a swift race.  We also heard the only rule:  give way to the faster boat. And, finally, the MANY hazards on this course, not the least of which was the train bridge in the no passing zone.

The trip up the course was uneventful – downright pleasant.  The crews noted the hazards and plotted their courses.  The trip down was, well, much more than exciting!

Our #20 quad marked the first crash of the race, pushed by the mad current into the anchored sailboats. A quick recovery, and they were quickly gaining on our #19 quad.  On the way to the deadly bridge, two opposing boats hit navigation buoys with one boat breaking all four riggers right off the boat.  Then we were in the no passing zone and found our #16 boat up against the pilings. #19 and #20 passed by and out the other side of the bridge along with some other boats that were behind.  #16 was able to release itself from the pilings at that point and row out on the other side.  Just before the turn at the sand bar, #20 rowed VERY close to pilings to make room for #19 who were being overtaken by Vic City on their other side.  Being ahead, #20 rowed their course with a clash of oars with #19 bow oars.  Another recovery and a dash for the finish.

Our single enjoyed a consistent race, start to finish.

All in all some great racing all around and a fun regatta.  Six brand new rowers were initiated to racing.  “It was pinball wizard!”  “I had no idea this was a contact sport….” “The most fun you can have in less than 30 minutes!”

Looking forward to Head of the Gorge Regatta!